Mayfair is one of London’s most exclusive locations, so when you are moving home, you want to choose a removals & storage company that works efficiently, carefully and discreetly. Cadogan Tate is London’s premier removals company, trusted with the treasured possessions of residents and businesses in Mayfair for over 40 years.

We are experienced at moving the home contents of Mayfair’s high net worth community. From priceless art collections to vintage wine cellars, you can be confident your belongings will be in safe hands.

When you first contact us, you will be put in touch with an experienced surveyor. They will make an appointment to survey your possessions and the layout of your residence to create your unique moving plan, including the best packing and transportation choices for each item. We think of every detail so that you don’t have to. You’ll then be assigned a personal move manager who will make sure your move is carried out exactly as planned, and who you can contact during the course of your move with any questions you may have.

We have built up a good relationship with the local council, and we can arrange parking permits, road closures or the use of specialist equipment such as lifting tables and cranes to move your items. Our aim is to make your removals in Mayfair as stress-free as possible.

Moving to a new house can be a stressful time, especially if you have items that are valuable, irreplaceable or difficult to manoeuvre such as monumental sized 2D art or sculptures. It’s imperative these items are packed, transported and unpacked by trained hands to ensure no harm comes to them in transit.

Here at Cadogan Tate, our removals team members go through an industry-leading training programme at our West London facility to ensure they have the skills and techniques needed to move any item.

Following your move plan, our Mayfair removals teams will be prepared and ready to pack your items quickly and carefully so you can get on with the rest of your move, safe in the knowledge that your possessions are being dealt with by London’s premier home movers.

Sometimes you may wish to place items in storage, either for the short or long term. We have a storage facility in West London. We also have storage facilities based worldwide, if you need individual items or collections shipped internationally. These bases are in Paris, the Côte d’Azur, New York, Los Angeles and Miami.

Each of our storage facilities are monitored by state-of-the-art systems to ensure they are secure, protected and comply with world-leading insurance regulations. We also offer handling capabilities, inventory management, and specialist rooms to view individual items or your entire collection.

Mayfair is home to some of London’s most exclusive shopping streets and desirable residential addresses. It is bordered by Hyde Park, Oxford Street, Piccadilly and Regent Street, and is an affluent area right at the heart of the City.

With its prestigious reputation comes a wealth of designer boutiques, Michelin-starred restaurants and private members’ clubs. Homes start from around £1 million for a one-bedroom flat, though it is not uncommon for these residences to only be used for a short period over the summer months.

For those who do opt to make Mayfair a more permanent home, there is no shortage of things to do and places to explore. There are incredible galleries and exhibitions, acres of green space thanks to the surrounding parks, and easy access to the rest of London. There are some fantastic new developments underway, as former office buildings are being slowly restored to prime residential use.

W1K 1 and W1K 7 – Western side of Mayfair, bordering Hyde Park

Flats start from just shy of £1M for a one-bedroom apartment in one of the many attractive art-deco or mansion blocks in the area, for example around the popular Grosvenor Square. These are well-placed at the heart of Mayfair and are often bought as second homes for those with regular business in the City. Larger apartments on the exclusive streets of Park Lane or North Row are in the region of £6M-£8M for three bedrooms.

When it comes to houses, there is a wide variety of choice with many different styles of home. In some of the winding streets, you can find mews houses for £5M upwards (although usually closer to £7-£8M). For something with real character, a Grade-II listed Georgian townhouse can fetch £9-£10M, with plenty of space and easy access to the retail areas of Mayfair. Top-end properties can be significantly more, up to £19M for the most desirable addresses, for example on South Street where there are many luxury new builds and refurbishments coming to market.

For exceptional, luxury purchases, Mayfair is the place to go, with some of London’s most exclusive shopping streets. There is a mix of independent retailers and high-end designer boutiques, catering to London’s high net worth community. Establishments like William & Son, a Royal Warrant luxury goods company, sit alongside well-known fashion brands like Marc Jacobs, Lanvin and Louboutin.

The best streets to visit for shopping include:

Mayfair itself is a small area and there are only a handful of schools that fall within its boundaries.

The Grosvenor’s Mayfair estate has one primary school, St George’s of Hanover Square. This school is popular with those in London on business, as reflected in the schools ethnically diverse intake with an above-average number of pupils for whom English is an additional language. It is also more common for pupils to join and leave the school outside of the usual term times, according to information on Find My School. It is rated Good by Ofsted.

While there are no state secondary schools directly in Mayfair, there is a new upper school, which only opened in September 2017 and is the sole senior school in the area. Eaton Square Mayfair is a co-educational independent day school based in a Grade I listed townhouse at 106 Piccadilly.

There is a good choice of both state and private schools for all ages in the surrounding areas. For primary school children, Connaught House, Wetherby Preparatory and Hill House are all close by. The Good Schools Guide is a useful resource for researching the local schools.

Top restaurants and hotels in Mayfair

There is no shortage of fine places to eat in Mayfair. The world-famous hotels are a good place to eat as well as to stay. The Ritz is based at 150 Piccadilly with its Michelin-starred restaurant serving the very best seasonal British ingredients. The Grill at The Dorchester on Park Lane offers both innovative and traditional dishes in its elegant, timeless dining room.

For hotels, it’s luxury all the way with Claridge’s, Brown’s Hotel, The Dorchester, The Ritz and The Connaught all within a short distance. There are some more contemporary gems too, such as The Stafford, a five-star stylish hotel near St James’s with individually designed rooms and its stunning American Bar. Or there is the newly renovated The Westbury Hotel, with stylish bedrooms, Italian-marbled bathrooms and wood-panelled entrances.

Best things to do in Mayfair

While this exquisite hotel has a couple of great restaurants and bars under its roof, Claridge’s is well known for its afternoon tea. Freshly baked British specialties are served with the finest teas, or a chilled glass of Laurent-Perrier Brut.

The Royal Institution of Great Britain

A celebration of science and how it helps to shape society, the Royal Institution was founded in 1799. Today it hosts talks and masterclasses for all ages on many different scientific subjects.

Two musicians who contributed a lot to the British music scene in different ways both lived in Brook Street, Mayfair – albeit 200 years apart. You can visit the home of composer Handel at 25 Brook Street, and Jimi Hendrix’s top floor flat at 23 Brook Street.

A stunning gallery filled with fine-art exhibitions and events. The Academy not only displays incredible works of art, but it also plays a key role in developing the artists of the future with its RA Schools’ competitive three-year postgraduate course.

Cadogan Tate has a long history of working in the Mayfair area. Our Mayfair removals & storage team has built up plenty of experience and local knowledge so we can plan your move with precision. We have a good relationship with Westminster City Council to ensure that we can arrange for all relevant permits on your behalf.

If you are moving to or from Mayfair, please get in touch to start working on your bespoke moving plan today. 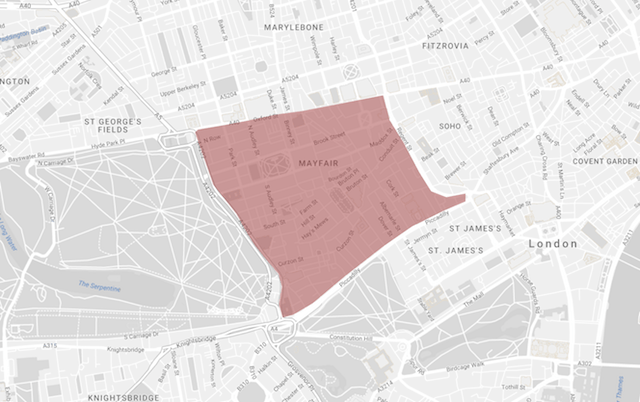