The attractive village of Barnes in south west London attracts households from all over London, who want to experience the community life, rural aspect and fine period homes.

They say that once you move to Barnes, you never leave. Couples often upgrade to larger homes to accommodate growing families, before downgrading again once children have flown the coop. As such, there is a lot of activity in the Barnes removals & storage market.

The distinctive vans of Cadogan Tate can often be seen around the pretty streets of Barnes, helping residents to transport their belongings to their new home. Our experience in removals & storage in Barnes, which spans over 40 years, plus our uniquely detailed knowledge of the local area, means we can offer a first-class service.

No matter what you need to move, our expertly trained teams can survey, assess and plan a tailored moving package to suit your exact requirements and budget.

Over the years, we all build up collections and belongings in our homes. These range from the practical, like kitchen gadgets and beds, to the treasured, such as jewellery or classic cars. When it comes to moving house, it can be quite overwhelming to think about how all these precious items will make it safely and logistically to their new home.

That’s where Cadogan Tate comes in. We are experts in the packing, transportation and unpacking for every kind of item, big or small. Our highly trained surveyors will assess your goods on an individual basis and suggest the best methods for securely packaging them.

You will then be assigned a Move Coordinator, who will ensure your move plan covers every base and is carried out precisely. All our removal company members undergo rigorous training in handling goods, so you know your items are in safe hands.

Cadogan Tate has secure and state-of-the-art storage facilities in London, not too far from the riverside village of Barnes. If you have items that need to be stored, rest assured these facilities offer you the very best in protection, monitoring and access control.

If you need to store items abroad for any length of time, we have international storage in Paris, the Côte d’Azur, New York, Los Angeles and Miami.

There are many areas in south-west London that offer a more rural way of life, but Barnes is truly a village. It is nestled neatly in a bend on the River Thames, which borders it on three sides. At the centre of the village sits a duck pond and green, with the pretty surrounding streets packed with independent shops, cosy cottages and cafes. It’s hard to believe that Waterloo is just a 20-minute train drive away.

Once you’ve experienced life in Barnes, you’ll never want to leave. Indeed, many families move her from surrounding areas, like Fulham or Chelsea, and stay for the rest of their lives, downsizing to period cottages as children move on.

The historic village was mentioned in the Domesday Book of 1086, and even now strongly resists infiltration and development from the modern world. The Barnes Community Association protects the village from overdevelopment, which has helped retain its unique character.

This small area is very desirable, located just off White Hart Lane to the south of Barnes Green. It has Barnes Bridge station with a direct link to Waterloo, making it popular with commuters, and the OFSTED-rated Outstanding Barnes Primary School. Little Chelsea also stretches into neighbouring Mortlake.

Character: The streets in Little Chelsea are mostly made up of attractive terraced Victorian cottages.

Castelnau is a long road that runs from the River Thames at Hammersmith Bridge, down past the boundary of the WWT London Wetland Centre. To its west is Castelnau Recreation Ground and another popular state school, Lowther Primary School. Close to Lonsdale Road is St Paul’s School and The Swedish School.

Character: On Castelnau itself you will find grand Regency villas and double-fronted Victorian houses. There are 20 pairs of classical villas built in 1842 by Major Boileau. Lonsdale Road offers large semi-detached Edwardian family homes.

A small development of homes right on the water’s edge. Bordered by the river, the Wetland Centre and Castelnau. This area also includes the Harrods Village development, which is the former site of the Harrods Depository and warehouses.

Character: The Harrods Village is a secure and exclusive gated development with mansion flats housed in a Grade-II listed building, set among landscaped gardens and with on-site amenities. Elsewhere in the Waterside area are modern houses and flats overlooking the river.

Right at the centre of Barnes is the popular green with its attractive duck pond. Here is Barnes High Street, which has plenty of independent shops, boutiques and eateries. The farmers’ market is held every Saturday in this area too.

Character: In the streets around the pond you will find the infamous ‘lion houses’. In 1866, an architect reportedly ordered 300 lion statues instead of three for a house project. These were repurposed on surrounding homes on gateposts and gables, and now the red-brick buildings are iconic and desirable.

The Terrace is a small stretch of road that joins Lonsdale Road at one end and Mortlake High Street at the other, along the banks of the River Thames. There are blue plaque homes on this street, for the composer Gustav Holst and founder of the Royal Ballet Dame Ninette de Valois.

Character: Large Georgian riverside family homes overlooking the river. The houses here are among some of the oldest in London along the river.

Shopping in Barnes is a unique and pleasurable experience. It is thought to have one of the highest concentrations of independent shops in London. For food, there is a Saturday farmers’ market right in the centre of the village. On the surrounding streets, there is a cheese shop, grocer, fish shop and bakery.

Other independent boutiques cover everything from books to furniture, antiques to high fashion. These are all located on Barnes High Street and Church Road.

There are some exceptional schools in the Barnes area, catering to all ages. This is one of the reasons that Barnes is so popular for families, and why it attracts homebuyers moving from other affluent London areas.

The nearest state secondary schools are in neighbouring areas, and include Richmond Park in East Sheen and Ashcroft Technology in Wandsworth. Fulham, over the river, has a couple of OFTSED-rated Outstanding secondary schools too.

It is the concentration of exceptional private schools in Barnes and nearby Hammersmith that draws wealthy families. St Paul’s School (for boys) and The Harrodian School (co-educational), are both in Barnes itself. There is a large Swedish expatriate community here too, catered for by The Swedish School on Lonsdale Road.

There are a number of well-regarded restaurants in Barnes, especially along the riverfront. Rick Stein has a branch of his popular fish restaurant here, which is perfect for an informal dinner overlooking the water.

Riva is a favourite chef’s restaurant, with both Jamie Oliver and Gordon Ramsey having cited it as one of their choice eateries. It offers Northern Italian cuisine, watched over with a careful eye by chef and owner Andrea Riva.

For those needing a room for the night, there are few hotels given the village’s aim to stay less developed. There is The Bridge in Barnes, a family-friendly pub with rooms (and it’s also a nice place to catch a bite to eat). Otherwise, it’s a short hop over the river to Hammersmith, where there are plenty of luxury hotels.

Things to do in Barnes

The large wetlands based in Barnes is owned by the Wildfowl & Wetlands Trust. Many local residents become members to be able to access this attractive conservation area regularly. It offers lakes, ponds and gardens, play areas and a café.

An attractive common in Barnes makes for a great place for weekend walks and family outings. It is one of the largest areas of commons in London covering 122 acres and is a local nature reserve. Facilities include a full-size football pitch and nature trail.

This cinema was originally an entertainment centre for the local community in the 1900s. It showed King Edward VII’s funeral via bioscope, an early form of cinema. It received its cinematograph licence in 1910 and became known as Barnes Cinema. Over time it has flitted from cinema to theatre to recording studio and back to cinema again.

This beautiful theatre in Barnes Green offers theatre, music and comedy in a small auditorium that seats just 74. It has a wide-ranging programme, so there is sure to have performances to appeal to all tastes.

Cadogan Tate has been working in Barnes and the surrounding areas for four decades. We have built up a good professional relationship with the London Borough of Richmond upon Thames to be able to organise permits and road closures as needed to move your belongings to your new home.

If you are moving to, from or within Barnes, give our friendly team a call to get your no-obligation quote today. 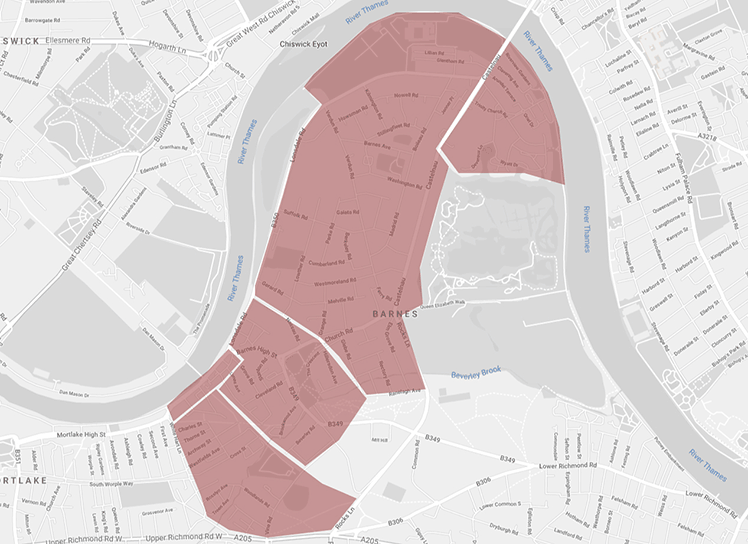