For over four decades, Cadogan Tate has been recommended by London’s residents to expertly handle their house removals in Westminster. We have been working within Westminster for a long time, and we’ve been trusted to pack, store and transport the prized belongings of the city’s most-discerning homeowners.

We understand the complexities of moving within the Westminster area. Planning a move takes time, expertise and local knowledge, as well as a good understanding of the city’s road restrictions and permits. Over our many years of working in the area, we’ve built up a strong relationship with the local council to help your next move go seamlessly and efficiently.

Our distinctive vehicles can often be seen around London, helping business and individuals with their Westminster removals and Westminster storage and ensuring safe delivery of their items to their new homes.

Get in touch with our friendly, expert team today to find out how we can manage your move. We will come up with tailored plan, based on a thorough assessment of your belongings, which is designed to

We know how much your belongings mean to you, so we ensure that every item you entrust into our care is treated with the respect it deserves. Whether it’s priceless and irreplaceable antiques, or ultra-modern technological gadgets, our team will expertly handle, pack and transport on your behalf.

All our team members undergo rigorous training, which is among the best in the industry. From our West London training school, we share the tricks of the trade that we’ve built up over more than 40 years in the industry.

If you’re making a residential move in or out of the Westminster area, get in touch today to speak to a surveyor who will analyse your requirements. We can then give you a detailed breakdown of your options, including any storage needed, and help you through the entire Westminster removals process.

Westminster’s desirable central location means that it’s well-placed within easy reach of our local storage facilities in West London. If you need to store valuable items on a short- or long-term basis for any reason, rest assured they will be looked after. Every one of our storage facilities are secured with the latest technology and have state-of-the-art monitoring systems.

If you need storage elsewhere in the world, we can offer facilities of the same high standard in Paris, the Côte d’Azur, New York, Los Angeles and Miami.

Exceptional service in the heart of London

Westminster means many things to many people. It is one of the biggest tourist destinations in the city, with a dense concentration of popular attractions. It’s home to the London Eye, Big Ben, Buckingham Palace, Westminster Abbey and the Palace of Westminster. It’s also the seat of British power, as the meeting place of the Houses of Parliament.

Away from the tourist traps and busy streets, however, the City of Westminster is also a large residential location. With grand Victorian and Georgian mansions and townhouses, it exudes luxury living. It’s also a prime area for investment, with many professionals opting for chic pied-a-terre properties as a second residence, or to place on the competitive rental market.

The area is growing in popularity. It had once been overshadowed by its impressive neighbours of Belgravia and Mayfair, but huge redevelopment projects and the promise of fantastic value for money, is making Westminster a desirable prime location.

Ashley Gardens is a sought-after mansion block, located within the Westminster Cathedral conservation area. It’s close to the green open spaces of both St James’s Park and Green Park, as well as being near Victoria for transport links.

Character: Large red-brick buildings make up Ashley Gardens, which consist of a mixture of studio flats to larger family maisonettes.

Bordering St James’s Park with The Mall running through the centre of the neighbourhood, the large historical buildings in this area are highly in demand to distinguished homebuyers.

Resident profile: Families and those looking for a London pied-a-terre

This small prestigious area is located just south of St James’s Park and is one of the best addresses in Westminster. It runs parallel to Birdcage Walk and is within minutes of Whitehall, Westminster Abbey and Parliament Square.

Smith Square is located just south of the Palace of Westminster. The centre of the square is home to a Baroque church, St Hon’s Smith Square, now used as a concert hall. The surrounding roads are made up of international offices and large residential properties.

Vincent Square is a ward of Westminster, but also the name of a large grass-covered square, which is privately owned by Westminster School. The square has a range of sports facilities and is often in use by the school children. It’s also close to Westminster Cathedral.

Character: Red-brick apartment blocks and freehold townhouses line the square itself and the surrounding roads.

Resident profile: Families wanting to be close to the best schools

Sitting right on the doorstep of Buckingham Palace, this small area of Westminster couldn’t be closer to the heart of the British monarchy. It’s a prime area for investment and many of the studio flats and small apartments have been bought by overseas and local property developers for the rental market.

Resident profile: Investors and professionals needing a high-end London base

The riverside location of this neighbourhood makes it particularly popular, especially with those looking for a London apartment to complement a main residence elsewhere. The area stretches along the river between Horseferry Road and Vauxhall Bridge Road, extending back to Regency Street.

Character: Many purpose-built apartment blocks highlight how this area has been growing in popularity, with contemporary new builds to meet demand. There are also period mansion blocks.

Residents in Westminster shop at nearby Victoria Street or in the Cardinal Place Shopping Centre. These locations cater for most high-street essentials. It’s only a short hop on the Tube to hit central London’s shopping districts.

Strutton Ground Market is a small street market in Westminster, held on a cobbled street, is busy at lunchtimes with its food stalls catering to the local workers.

For more bespoke and unique buys, St James’s Street and Jermyn Street have everything from historic bootmakers to perfumeries. Many of the stores here have been in place for centuries, including a 300-year-old wine emporium and an artisan cheese store, which was the cheesemonger to HM Queen Victoria.

The City of Westminster has plenty of schools to cater for the dense residential population. The government’s find and compare schools service lists 67 primary schools, 41 secondary schools and 33 sixth form/further education schools and colleges in Westminster. This is a useful tool to research the best schools in the area by performance.

There is no end to exquisite restaurants in Westminster. If you like fine dining, there is an establishment to cater to whatever cuisine you’re in the mood for. Roux at Parliament Square is one of Michel Roux Jr’s restaurants, serving contemporary European dishes. The Cinnamon Club is one of the best Indian restaurants in London, based in a Grade II listed former Victorian library. See more of the best restaurants in this area on the Michelin Restaurant website.

There is also a good range of luxury hotels, designed to serve the many visiting dignitaries who frequent Westminster. The Corinthia Hotel in Whitehall Place is grand and exquisite, in a prime, central location. St Ermin’s Hotel is nestled at the bottom of a tree-lined courtyard, which offers an opulent and relaxing environment in St James’s.

Things to do in Westminster

Situated close to Westminster in Trafalgar Square, this gallery is a must-visit for those interested in European Art. With paintings by Cézanne, Monet and Rembrandt, it’s easy to get lost for a day in the incredible masterpieces.

Not too far away is this celebration of portraits across all art forms. The exhibitions are regularly refreshed and there is a comprehensive programme of talks and lectures.

You can’t stay in Westminster without visiting the Tate Britain, which is on the river and focuses on the best of British art. It covers works from the 16th century through to the present day, with talks, workshops and exhibitions.

Every summer, the State Rooms in the palace are open for visitors for 10 weeks. This is a unique experience to see instead the British monarch’s London home. Entrance includes an exhibition and multimedia tour.

This Royal Park is on your doorstep and offers a lovely retreat from the city. It’s popular with local families and tourists, and includes The Mall and Horse Guards Parade.

Attend a service or simply visit the abbey to see the incredible architecture that has over a thousand years of history. Weddings and Coronations of generations of the Royal Family have been conducted here.

Cadogan Tate has a great relationship with Westminster Council and we have plenty of experience working in the area. We understand the logistics of moving you in or out of mansion blocks and townhouses, including how to obtain all the relevant permissions and permits for our vehicles and any lifting equipment needed.

If you want a stress-free Westminster removal or are looking for Westminster storage, get in touch with our team today and we can create a bespoke package to suit your needs. 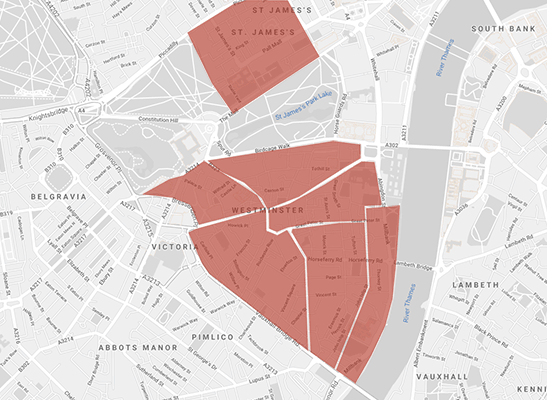