We understand the importance of your belongings to you and that your move to your new home needs to be as straight-forward as possible. It’s our attention to detail and our experience of organising both home and business moves in the area, that we are the first choice for Marylebone residents.

Our teams have been moving the residents of Marylebone for over 4 decades, making our lorries a regular sight on the streets of W1 and NW1.

As we are organising removals in Marylebone so frequently, we have a great relationship with Westminster Council. Our teams will organise all the permissions needed for loading and unloading on your road.

When you have requested your free quote, one of our surveyors will arrange a time to visit you. As well as understanding all the items you need to move or that require storage, your surveyor will advise you on the most appropriate methods of packing, storing and moving your belongings. We’ll then provide you with a quote and arrange all the final details for you.

When it comes to packing and unpacking, our expert teams are all trained to treat your possessions with the greatest of care. From the finest works of art to the latest gadgets, they will expertly pack, move and unpack your items.

All our team members attend industry leading training at our West London training school. It is here that they learn the techniques we have perfected in over 40 years of moving homes and fine art in London and around the world.

The training and experience of our teams means that you can relax while our teams move your household efficiently and carefully.

Each move we undertake is tailored to your individual needs. As part of your free survey, your surveyor will understand your requirements. We provide packing and unpacking options that cater to most budgets and your surveyor will be able to advise on the most suitable for your needs.

In all our storage facilities, we provide a range of storage options including containerised storage, secure private rooms, racked commercial and archive storage. All options are covered by state-of-the-art monitoring, access control and fire detection systems. We also offer handling capabilities and inventory management where required.

Often described as an urban village, Marylebone is just a stone’s throw from the hustle and bustle of Oxford Street but a world away in atmosphere. Offering a mix of period architecture and stunning new developments with convenient access to the West End on its south border and Regent’s Park to its north. Marylebone’s central location, impressive architecture and boutique shopping make it one of London’s most desirable neighbourhoods.

The area is centred around Marlyebone High Street, that has become a mecca for foodies and boutique shoppers. With plenty of long term residents Marylebone has retained its local vibe, while attracting new residents and visitors alike.

Marylebone is a popular residential area in central London. The vast majority of properties are flats making up 96% of the housing stock. There are very few detached and semi-detached properties in the area, meaning the remaining 4% of the properties are terraced houses. Lateral flats are popular in Marylebone, these large flats are typically created by spanning adjoining properties.

The majority of property in Marylebone is period, with 44% dating from pre-1900. The Georgian era is when Marylebone had its first property boom, making this the predominant architectural style in the area. There are also Edwardian and Victorian properties on offer, including mansion flats and pretty mews properties. In recent years the area has had a number of premium developments, so if you are after a new build there are a variety to choose from.

North of Marble Arch the W1H postcode is bounded by the A5 and Marylebone Road. At its centre lie Bryanston Square and Montague Square, built as part of the Portman Estate between 1810 and 1815. These squares are divided by mews and offer excellent examples of Georgian period properties.

Character: Neat streets with a mix of architectural styles from the Gothic red brick of Chiltern Street, to classic Georgian facades.

Best addresses: Chiltern Street and various Mews streets tucked away in the area

Spanning from the east of Marylebone High Street to Portland place, this area of Marylebone includes the medical district of Harley Street.

Resident profile: Families and international residents with the proximity of a number of embassies.

The elegant white terraces of Regents Park West are home to some of London’s finest properties.

To the North of Marylebone Road up to the border with St John’s Wood, Lisson Grove incorporates Marylebone Station and Baker Street tube station.

Character: The south side of Lisson Grove, is very similar in nature to the more traditional areas of Marylebone. Moving north the properties lose their architectural appeal with a higher density of post 1950s properties and ex local authority properties.

The High Street is a central attraction of Marylebone. The landowner’s decision to curate the shops it leases to, has led to a vibrant and interesting shopping scene. Marylebone High Street’s mix of local boutiques and international brands that sit comfortably together, with its plethora of world class restaurants and cafes has created one of London’s shopping destinations. Its character is a village vibe, with locals shopping and eating on their doorstep, meaning you will never feel like a tourist in your local neighbourhood.

Not strictly in Marylebone, Oxford Street is the southern boundary of Marylebone. As one of the busiest shopping streets in London and home to the department stores of Selfridges and John Lewis, it is conveniently located for residents of Marylebone.

Over the past 20 years Marylebone has become a foodie destination. If you’re a foodie it’s likely that the restaurants, cafes and delis of the neighbourhood are as much of a draw as its central location and impressive architecture.

There’s a wide selection of cuisines on offer, from Michelin star restaurants, to laid back locals, you’ll always find something to suit your mood.

Marylebone has a selection of well-appointed hotels from the media magnet Chiltern Firehouse to the classic Langham. For a listing of local Marylebone hotels, the Telegraph’s site is comprehensive.

Things to do in Marylebone

There is plenty to do on the doorstep in Marylebone to keep both long term residents and their visitors from ever getting bored.

Visit the museum dedicated to Marylebone’s most famous fictional resident. This museum is located in 221b Baker Street the address of the fictional character. It is as eccentric as the character himself, housing everything from a lifesize Doctor Watson, to a replica study and murder weapons.

An oasis at all times of the year, Regent’s Park is one of London’s Royal Parks and a wonderful green space. Perfect for picnics in summer. It has an Open Air Theatre and is home to London Zoo.

One of London’s leading fringe theatre venues featuring a rich schedule of new works and re-imagined classics from emerging companies.

A free to enter gallery with an extensive collection of 18th century French art, including paintings from the Old Masters, furniture and other artworks. One of London’s lesser known gems.

An impressive Edwardian bookshop, with thousands of books on display in its custom built interior. It is renowned for its extensive travel collection, making it a must visit for travel inspiration.

A restaurant with a difference. Offering a seasonal lunch menu and an advanced booking only guest chef line-up for dinner – Carousel has something for even the most restaurant weary of diners. It also doubles up as a creative hub with a regular series of food and art events.

If Marylebone’s delicatessens aren’t enough for you, Marylebone hosts a farmers market every Sunday from 10am to 2pm. With around 40 stalls every week you can find everything from homemade pasta to oysters. Perfect for stocking up with gastronomic delights for the week ahead.

A boutique cinema offering food, wine and retro sweets. The perfect venue to watch the latest blockbuster in style.

A destination for animal lovers, London Zoo has a wide variety of animals. With events and opportunities to meet giraffes, meerkats, monkeys and penguins, it is a fun day out for all ages.

Cadogan Tate has been working in Marylebone for over 40 years. In that time our removals team has built up plenty of experience and local knowledge, so we can plan your move with precision. We have a good relationship with Westminster City Council to ensure that we can arrange for all relevant permits on your behalf.

If you are moving to or from Marylebone, please get in touch to start working on your bespoke moving plan today. 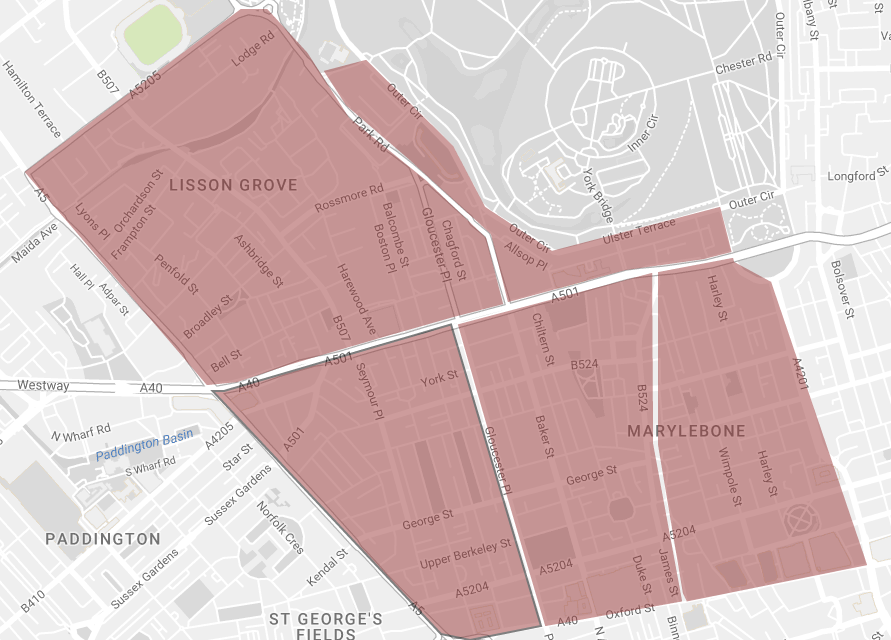