The expert removals teams at Cadogan Tate have been working in and around Regent’s Park for over 40 years. No matter how complex your individual needs, we are here with our expertise and knowledge to plan a seamless house move in London.

Moving items into a period home has its complexities and it’s important that the right tools and skills are used to protect both your belongings and your home itself. We can arrange the relevant permits and road access needed to remove larger items, as well as suggest the best packing techniques for your valuable treasures.

Your personal service begins from the moment you get in touch with us. Our qualified surveyors will talk through your needs, survey your items and build you a unique plan for your move. Our Move Coordinators will then ensure that your Move Plan goes off without a hitch, so you have nothing to worry about.

Get in touch with us today to discuss your Regents Park storage and removals requirements and we will start the process of giving you a no-obligation quote to suit your needs.

When moving to or from Regent’s Park, use our expert removals services to ensure the safe and efficient relocation of your most-prized belongings. Cadogan Tate has been working in London for decades, and we’ve built up a solid reputation with the discerning residents of one of the city’s most prestigious neighbourhoods.

Our Regent’s Park storage and removals teams have been expertly trained in the best methods for handling, packing, transporting and unpacking your household with care and attention. No matter how big or small, delicate or bulky, we can advise you on the best methods and packaging to safely move your items.

Each moving and storage assignment we take on is approached in a bespoke, tailored fashion, so we can deliver a personal service that suits your individual needs.

Cadogan Tate has UK-based storage facilities in south-west and west London, which are easily accessible from Regent’s Park. These facilities have state-of-the-art monitoring systems and fire-detection technology to ensure that your most valuable items are secure. If you need storage on a short- or long-term basis, our teams can advise you on our specifications in more detail.

We also offer international storage, with facilities in Paris, the Côte d’Azur, New York, Los Angeles and Miami to suit your requirements.

Regent’s Park (officially The Regent’s Park) is very much a Royal Park. The Price Regent commissioned architect John Nash to create an opulent and attractive design. The original masterplan was never fully realised, featuring an ambitious 58 villas, as well as the many terraces surrounding the perimeter, a canal and lakes.

It now has an Inner Circle, which surrounds the world-famous Queen Mary’s Rose Garden; and the Outer Circle, which runs around the circumference of the park and is a busy thoroughfare, linking central London. The park is Grade I-listed and remains one of the most attractive parks in the country.

It has become a popular location for the world’s wealthiest families to reside, including royals, ambassadors and the aristocracy, as well as modern celebrities. The terraces directly surrounding the park are incredibly desirable, featuring original John Nash designs and stunning views of the park.

Located to the north-east of the Outer Circle, Gloucester Gate is one of the terraces commissioned by the Prince Regent, designed by architect John Nash and built by Richard Mott in 1827. The terrace itself only has 11 houses, so they rarely come to market, but the neighbouring streets are equally desirable.

Located on the east side of the Outer Circle of Regent’s Park, Cambridge Gate and its surrounding roads are highly regarded and very desirable. There are a number of private residents’ gardens attached to some of the properties, and it’s within easy reach of the main shopping centres and high-end restaurants.

Character: Grand, classical exteriors and luxury, bespoke interiors, many with balconies overlooking the park itself

Park Square is located to the south of Regent’s Park, which was also designed by John Nash. Park Square is one of the largest private squares in London and it links to Park Crescent (non-residential) via the Nursemaids’ Tunnel, an early example of an underpass.

York Terrace runs to both the east and west of York Gate, in a desirable location to the south of Regent’s Park and close to Marylebone High Street. York Terrace was designed by John Nash and Decimus Burton, but both halves were built by different people: James Burton to the east and Willian Mountford Nurse to the west.

The area to the west of Regent’s Park running from Hanover Gate to Baker Street has a few classic and desirable terraces. Hanover Terrace (built in 1822) and Kent Terrace (1827) were designed by Nash, and the small Clarence Terrace was designed by Deciums Burton.

Character: Grade II-listed terraced properties that come to market very rarely, many of which have been extensively refurbished

Park Village is another creation by John Nash, built in the 1820s. There are two sections: Park Village East, which is a much bigger development, and Park Village West, a compact crescent. Not all the village has survived, as much of Park Village East was removed when the railway line was built.

Character: A collection of more compact, though equally elegant, terrace houses and villas in an attractive crescent, showcasing a variety of styles

The most exclusive homes in the area are within the boundaries of Regent’s Park itself. Only nine villas were built, many of which are still private residences, though some no longer exist. One of the most notable is Winfield House, rebuilt in the 1930s and now owned by the US Ambassador. It has the largest private garden in London, second to Buckingham Palace

Character: Much of the original classical architecture of the remaining buildings has been extensively restored or rebuilt, but these are still some of the grandest villas in the country

There are plenty of locations for the discerning shopper, with boutiques to suit every taste. Head to stylish Primrose Hill and Camden to the north of Regent’s Park for independent shops covering fashion, antiques, books, interiors and more. A visit to the Camden Market is a great way to discover underground and up-and-coming designers and creators.

To the south of Regent’s Park, is the village district of Marylebone, with Marylebone High Street offering high-end and exclusive brands, within easy reach.

Regent’s Park is also within close proximity to the main central London shopping districts, such as Bond Street, Oxford Street and Regent Street.

Directly within the Regent’s Park area and in the neighbouring districts of Primrose Hill and Camden, there are a number of excellent schools. Francis Holland School is an independent senior girl’s school in an excellent location, based to the south-west of Regent’s Park. North Bridge House Prep School (mixed) is popular among the affluent families in the area for younger children, and the nearby The Cavendish School in Camden Town offers girls-only primary education. Many families also use the local state school for primary education, Christ Church CE Primary School.

The area boasts some well-known higher education options too, including the London Business School and the Royal Academy of Music.

Regent’s Park is at the centre of culinary excellence, with restaurants worth visiting in nearby Camden, Primrose Hill and Marylebone. Gordon Ramsey has a gastro pub close by, The York & Albany, for a more relaxed experience. Housed in a John Nash townhouse, the food and drink are high-class, and there are even elegant hotel rooms available.

The Landmark London on Marylebone Road is a five-star hotel, less than 10 minutes’ walk from Regent’s Park. It was, and still is, one of London’s grandest hotels, built in 1899. It also has a number of dining and bar options, all within the same opulent surroundings.

Things to do in Regent’s Park

The park itself is a tourist attraction. Perfect for a weekend walk or picnic, running or cycling, or playing in the park with the family. The Hub has multiple sporting facilities, and there are numerous lakes, fountains, statues and gardens to explore.

Located within Regent’s Park, the zoo is great for visiting with children. It offers a wide range of animals to see, as well as daily talks, tours and events. Watch out for an illuminated trail at Christmas time, and animal-mad children might like to try being a Keeper for the day.

Frieze London is an annual art event that takes over part of Regent’s Park in October. It features more than 160 of the world’s leading galleries, with over 1,000 artists represented. A great place to view and buy unique artworks.

Close to Regent’s Park is this classic London attraction. Get up close and personal with celebrities of today and the past – their waxworks at least. New installations are added all the time for a bit of fun.

Visit nearby Baker Street, the home of detective Sherlock Holmes who lived at 221b in the stories by Sir Arthur Conan Doyle. Here you can view the first-floor study with its Victorian furnishings and design.

In the warmer months, take a visit to the Open Air Theatre to watch a variety of performances, featuring classic and more modern productions alike. It’s one of the largest theatres in London and completely uncovered.

Over the four decades of working in the removals industry in London, Cadogan Tate has built up a good working relationship with key authorities. This means that we are in a position to help secure relevant permits to help move you in and out of your Regent’s Park home by utilising our contacts at both Camden Council and Westminster City Council. Therefore, if you’re looking for a stress-free removals and storage in Regents Park, get in touch with our expert team today and see how we can help. 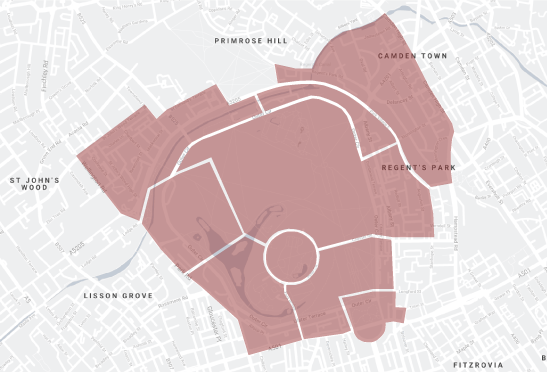