The ultimate expat guide to the city of Nantes, France 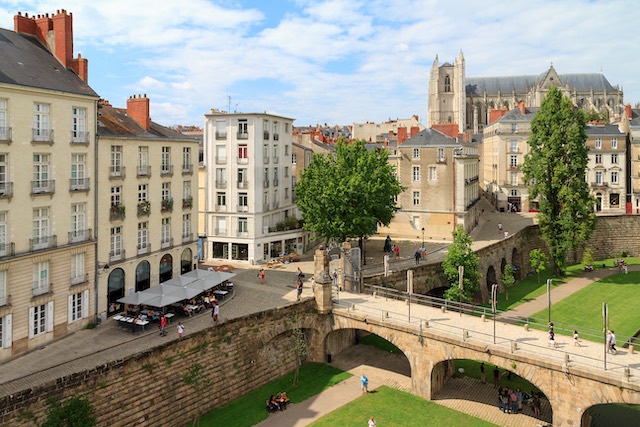 Nantes is described as a ‘forward-thinking city’, bringing together a strong economy and a taste for innovation. It’s the third largest industrial city in France (sixth by population) and yet it boasts some advantages over its Parisian counterpart as a desirable location for professional expatriates.
The city has a reputation for offering an exceptionally high quality of life for those who opt to live and work in Nantes. It has also retained a strong historical and cultural heritage, and is often referred to as one of the best places to live in France.

Nantes can get overlooked as an expatriate destination in favour of nearby Paris, however this riverside gem has a lot to offer those looking to live and work in France. In 2016, The Local ran a survey which deduced that Nantes was the second-best city in France for foreigners to live in (behind Rennes).
It has a strong jobs market across a wide range of different fields, offering plentiful opportunity and potential career growth. As it grows popular, it might be advantageous for expats who speak the language; though as a growing hub for European and international business, more expatriates are relocating for work through inter-company transfers.
Good salary prospects are met with a relatively low cost of living. According to Nomadlist, the cost of living for an individual expat in Nantes is $1,304 a month, in comparison to Paris which comes in at $2,504 a month.
The lower cost of living is just one factor that contributes to a high quality of life in the city. It is particularly good for those moving with family, given its large number of open green spaces, amenities and good schools. The International School of Nantes, for example, offers an extensive bilingual education in a forest-based environment.
Day-to-day life is laidback. While there is a bustling business sector, local residents encourage time spent outside, being active and exploring the green surroundings. It might be hard to take a step back, coming from a fast-paced city environment, but this slower take on life is one of the reasons that many opt to relocate to Nantes in the first place.

Those with a passion for art and culture will certainly suffer no disappointment in this Loire-Atlantique city based on the banks of the Loire river. Once a busy seaport, it became the historic capital of the Brittany region.
The 13th Century Château des Ducs de Bretagne is one of the most celebrated and must-visit monuments. It has been extensively restored and now houses the Nantes History Museum, detailing the city’s past.
Those with a particular fondness for traditional French châteaux will find plenty of examples in the surrounding Loire Valley too. Equally, around Nantes are some architecturally stunning churches and cathedrals. The Cathédrale Saint-Pierre-et-Saint-Paul de Nantes (The Cathedral of St Peter and St Paul of Nantes) matches the famed Notre Dame in Paris for size and striking design.
If you prefer your culture on the greener side, then it’s worth a visit to the Jardin des Plantes, one of the largest botanical gardens in France. Featuring more than 50,000 flowers, one annual event sees it littered with giant natural installations. The artificial island of L’île de Versailles offers a stunning Japanese garden and traditional tea house.
For something truly unique, the Machines de L’île presents Nantes’ most-photographed structure, a giant mechanical elephant inspired by the works of Jules Verne, who was born in the city.

Nantes encourages environmentally conscious travel, with an extensive public transport system to help encourage its residents to get around on foot, bike, tram and bus.
Nantes has had a tramway since 1879, though the original line suffered heavy bombing damage in World War II and was closed in the 1950s. The current tramway system has been serving the city since 1985 and is still a popular way to get around. Its three lines cover 27 miles, so most of the main urban centre is accessible in this way.
As well as the trams, there is an extensive bus network, which includes the Navibus waterbus routes. All of this falls under the Semitan public transport network, most commonly called TAN.
For those who require travel further afield, the high-speed train can take you to Paris in under two hours. Meanwhile, the city is served by the Nantes Atlantique Airport to the southwest of the city. The third-largest airport in the west of France offers international travel, as well as regular services to and from the UK.
Nantes is very walkable, and indeed many people enjoy the stroll as part of their daily commute. The city is also bike friendly – the cycle network around the metropolitan area covers over 300 miles. There is a public bicycle system with over 1,000 bikes at 123 stations called Bicloo.

The city of Nantes is split into 11 separate quartiers (neighbourhoods), which is then broken down into many smaller districts. Many expatriates will opt to rent apartments in the urban centre, making for a straightforward commute to work and to be at the heart of the action.
For those opting to buy, there are some exceptional properties in the wider countryside. Many villas are nestled into large grounds, while there are large detached family homes within 10 minutes of Nantes by car. You can get a lot of space for your money in Nantes too, with an average purchase price of €2,713 per square metre in 2017, over a third less than in Paris.
If you’re moving to France, find out more about how Cadogan Tate can help your international move by getting in touch with a consultant today.