If you’re making a London residential move, in or out of the exclusive neighbourhood of Belgravia, it pays to use the premier removals company operating in the area. Cadogan Tate has been working with the residents of Belgravia for over 40 years, helping individuals, businesses and families with their relocations.

Belgravia is one of the most exclusive and desirable areas of London, so we understand that your house move needs to be undertaken with professionalism, discretion and care. Our trained moving teams can offer a bespoke and highly efficient service to suit your requirements.

We have built up a detailed knowledge of the area and understand the individual complexities of moving to a period home. If you are familiar with the area already, you may have spotted some of our distinctive vans and teams at work.

Contact us today to get a free, no-obligation quote for your Belgravia removals, tailored to your needs, to find out how we can help you with your next house move.

When handling valuable items, it’s imperative they are treated with the utmost care and attention. That’s what our highly trained moving teams can offer when it comes to your London house move.

Every member of our experienced team has received our bespoke training to ensure they are equipped with the knowledge needed to precisely pack and unpack your belongings. They are well versed in the specialist equipment and handling techniques required for all manner of household articles, whether big or small.

We can offer a range of different packing and unpacking services to meet your exact needs, to help your Belgravia removal go smoothly. Your Move Coordinator will talk you through your options and explain the best solutions to even the most complex of scenarios.

Cadogan Tate has secure, high-tech storage facilities in west and south west London, close to the neighbourhood of Belgravia. If you need to store precious items, you can rest assured that they will be carefully and properly handled and preserved by our professional teams.

We also offer equally impressive facilities across the globe, in Paris, the Côte d’Azur, New York, Los Angeles and Miami.

Belgravia was known as Five Fields in the Middle Ages, dangerous to cross at night due to the presence of highwaymen, but attractive during daylight hours. It has more than shaken off its once-unsavoury ties and was developed by the Grosvenor family in the 1800s. The name of the neighbourhood is taken from Belgrave in Cheshire, close to the Grosvenor family’s country seat at Eaton Hall.

Belgravia is one of the most prestigious residential areas in London, characterised by its white Stucco terrace homes and notable, high-society residents. Over the years, it has housed the gentry, politicians, wealthy investors, businessmen and civil servants, as well the occasional creative and literary genius.

Many of the large houses are used for business headquarters and embassies, though there are many residential addresses in the area. Some of the most-expensive homes in the world can be found in Belgravia, along with attractive mews houses and luxury penthouse apartments. There are a high number of foreign investors, which means that many of the exclusive properties sit unoccupied for part of the year.

A smaller square that was refurbished in 1997. Along with Eaton Square and Belgrave Square, it is one of the three garden squares built by the Grosvenor family. It has been home to a number of famous residents, including Mary Shelley and Margaret Thatcher.

Resident profile: Politicians, ambassadors and civil servants with their families

A square built by the Grosvenor family and named after Eaton Hall in Cheshire. The first block was laid out by Thomas Cubitt, as was Belgrave Square, but it was not completed until 1855, the year he died. Eaton Place is an extension of the square, also constructed by Cubitt.

Character: There is a mixture of architectural styles, which reflects the longer period of time it took to construct. As well as classical terraced homes, there are wider-fronted buildings and mews cottages. There are many embassies in the area.

Belgrave Square is one of the largest 19th century squares in the country, right at the centre of Belgravia. It was completed in the 1840s for the 2nd Earl of Grosvenor. The square contains statues of Cristopher Columbus, among other notable figures, and a sculpture by Enzo Plazzotta. Upper Belgrave Street connects the square to King’s Road, and was also built in the 1840s.

This attractive crescent was created by Thomas Cundy II and is named after 2nd Earl of Wilton, built in 1827. Over the years, it has been home to a number of notable politicians and civil servants.

Character: Grand terrace houses, many with Stuccoed or iron balconies overlooking the gardens. Some have been refaced and stone clad over time.

Named after the Secretary to the Treasury, William Lowndes, this desirable square runs parallel to Sloane Street and is in close proximity to Knightsbridge. This exclusive residential area has some of the most expensive properties in the world.

This popular estate is named after Earl Cadogan and runs parallel to Sloane Street in the south west of Belgravia. Cadogan Place surrounds the large private Cadogan Place Gardens.

Character: As with much of Belgravia, Cadogan Place is made up of white and stone-clad terrace houses.

There are a number of exclusive shopping districts within Belgravia. For a village-like atmosphere, head for the southern part of the neighbourhood and try the stores on Elizabeth Street, where you can find chic boutiques and independent shops.

There is also a good selection of fine artisan shops on Motcomb Street, which is also home to Christian Louboutin Motcomb, Rococo Chocolates Belgravia and The Fine Cheese Co. Belgravia.

The centre of Belgravia is just a stone’s throw from the luxury shopping experiences of Sloane Street and Knightsbridge.

Schools in Belgravia (SW1X and SW1W)

Other popular schools include Francis Holland School for girls, an independent Church of England school, and Hill House International Junior School, which also has an annex in Switzerland.

See The Good Schools Guide to view other nearby schools in Westminster, Knightsbridge and Mayfair.

For those with a keen interest in fine dining, Belgravia close to some of London’s most exquisite eateries. There are four one Michelin Star restaurants in Belgravia, including Marcus, Céleste, Pétrus and Amaya. Nearby, there are both two- and three-star restaurants, located in Chelsea, Hyde Park and Mayfair, so there is never a shortage of high-quality places to eat.

There are also some exceptional hotels, most notably The Goring, which is a historic luxury hotel that has played host to the nobility and royalty in the many years since it opened in 1910.

Things to do in Belgravia

Located just off Sloane Street is the Cadogan Hall concert venue, offering a varied programme of over 300 events per year. The Royal Philharmonic Orchestra is resident here and it is the perfect venue for an intimate performance. The theatre seats just 950 and it’s the chosen venue for the BBC Proms Chamber Music Series.

Based in Sloane Square, the Royal Court Theatre, is known as the ‘writers’ theatre’ promoting the work of emerging, undiscovered and established talent alike. More than 120,000 people visit the theatre every year and has been in action for over 60 years.

The iconic department store on the boundary of Belgravia and Knightsbridge, where it has been trading since 1831. It’s the place to go for luxury fashion, offering exclusive and niche brands to suit the London elite.

This small landscaped square at one end of Sloane Street is one of London’s most glamorous places for shopping, dining and soaking up culture. There are plenty of high-end stores, we well as exclusive boutiques. At its centre is the Venus Fountain, constructed in 1953 by sculptor Gilbert Ledward.

Cadogan Tate has been helping the affluent residents of Belgravia and its surrounding areas move for over 40 years. We are known for our discretion and professionalism, ensuring that your London residential move within the City of Westminster and Royal Borough of Kensington and Chelsea goes off without a hitch. To find out more about Belgravia removals & storage, please give our knowledgeable team a call today. 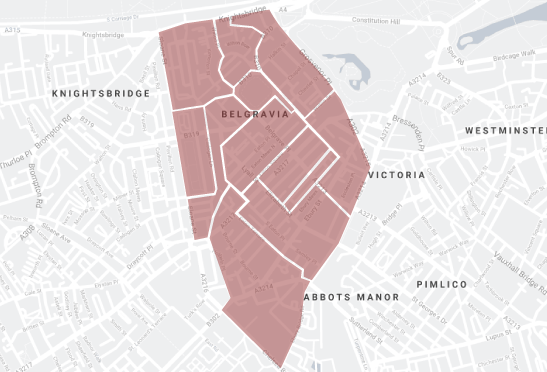