Primrose Hill is one of the most exclusive neighbourhoods in North-West London, so you want a removals service to match when moving to or from the area. Cadogan Tate vans can often be spotted in the streets, trusted to help move the notable families who call Primrose Hill home.

We know how important it is to have a hassle-free residential move in London and to ensure your belongings are well packed and looked-after in transit. We’ll treat your possessions as if they were our own.

Whether you’re moving heavy items, such as a piano or home gym equipment, or the latest technology, we have the knowledge and experience for a seamless move. If you need to put any items in storage, we can help you with that too, with our own high-tech secure facility just a short distance away.

Get in touch today to find out how we can help you and to receive your personalised bespoke quote to meet your needs.

There is an art to proper packing and unpacking of goods when undertaking a large-scale house move. Every item, from the biggest to the smallest and most delicate, should be treated with care and attention.

All the team members at Cadogan Tate have received the very best training in the industry, perfecting the techniques of Primrose Hill removals. We can help you with every aspect of your move, from the logistics and admin, to the heavy lifting and transportation.

We have been working in the residential moving industry for over 40 years, and have built up knowledge and experience. You can relax while we work on packing and moving your personal belongings with care.

We can tailor an individual package to suit your exact needs, based on an assessment by our qualified surveyor.

We have secure Primrose Hill storage facilities. If you need to store valuable items for any period of time, you can be safe in the knowledge they are well protected. We have modern, up-to-date systems, including state-of-the-art monitoring, access control and fire detection. We also offer handling capabilities and inventory management where required.

If you need international storage, consider our other facilities in Paris, the Côte d’Azur, New York, Los Angeles and Miami.

Primrose Hill is the name of the Grade II listed park and its famous grassy hill, just off Regent’s Park, which also lends it name to the surrounding residential area. The hill itself is 65 metres high and from the top you can see across Central London on a clear day. The view is a reminder of just how close you really are to the City; it can be easy to forget in the small village of Primrose Hill itself.

Many notable people have lived in this area, with no fewer than seven English Heritage blue plaques. In the 1990s, the area built a reputation as the place where all celebrities of the day chose to call home, earning themselves the moniker ‘The Primrose Hill Set’.

In the years since, Primrose Hill has remained an ultra-exclusive destination for celebrities, socialites and media personalities. There are less than 8,000 residents in the area, giving it a real community focus.

This residential area is centred around Regent’s Park Road, the main high street. Here you will find restaurants, shops and cafes, right at the centre of village life.

Some of the finest homes in Primrose Hill can be found on the roads just north of the main park. Further back, off King Henry’s Road is the Chalcots Park Estate, towards Swiss Cottage.

Character: The most exclusive and attractive properties are the detached Queen Anne style houses from the 1920s closer to the park. The Estate itself was developed in the Seventies as a mixture of townhouses and apartment blocks, and their external appearance is not overly desirable.

Resident profile: A mixture of families and City professionals

Located between Primrose Hill park, Regent’s Park and the affluent St John’s Wood, the streets to the west of the area are highly desirable.

The main shopping district is along Regent’s Park Road. The upmarket village of Primrose Hill has retained some old independent shops, though many have closed in more recent years due to growing commercial rents. However, you can still visit the butcher Jack O’Shea and fishmonger La Petite Poissonnerie for quality home cooking ingredients.

You will also find small furniture shops and florists, alongside antiques stores and clothing boutiques. Primrose Hill Books is a well-stocked bookstore for those interested in literature.

There are some excellent schools in Primrose Hill and its surrounding areas.

North Bridge House has an excellent reputation and teaches across all ages and five locations. It has a nursery and pre-prep in nearby Hampstead, whereas the prep school for ages 7-13 is close to Primrose Hill, next to Regent’s Park. For older children, it offers either Senior Hampstead or Senior Canonbury.

You can see a full list of primary schools and secondary schools near Primrose Hill on SchoolGuide.co.uk.

There are lots of independent eateries in Primrose Hill, serving up exquisite food in intimate locations. Greenberry Café, for example, is a small but lively restaurant serving a wide range of cuisines, and is particularly popular for its weekend brunch.

If you fancy going Greek, Lemonia describes itself as ‘Primrose Hill’s favourite neighbourhood restaurant’, having been serving its residents for over 35 years. The French bistro L’Absinthe is equally popular, with plenty of comforting classics. For premier dining, try Michael Nadra’s Primrose Hill restaurant, which is chic and stylish with a tasting menu worth trying.

Primrose Hill doesn’t have many hotels, but the surrounding areas of Hampstead and Regent’s Park have plenty of offering to suit all requirements.

Things to do in Primrose Hill

The famed hill itself, after which the residential area is named, is certainly worth a visit. It is separated from Regent’s Park by Prince Albert Road and the ZSL London Zoo, but it is part of the same Royal Park. The open space offers a tranquil retreat for weekend walks and picnics.

Home to over 755 species of animal, London Zoo has one of the largest collections in the UK. It is also the world’s oldest scientific zoo, opening in 1828 for study before its public opening in 1847. It’s based on the northern edge of The Regent’s Park, and is a good option for families with children.

Held every Saturday, this market is great for picking up locally produced produce and street food. It’s only small, but it is popular and helps to retain the village community vibe. It’s based at St Paul’s School.

Hone your baking skills by taking part in a workshop run by professional pastry chef Maria Mayerhofer. She offers private and group classes, as well as a baking club, from her kitchens in West Hampstead and Hampstead. Classes include patisserie, petits fours, bread and more.

Regent’s Park is just over the road from Primrose Hill and is a popular spot to hang out over the weekend. It is named after the Prince Regent, who later became King George IV. There is a lot to do, including the Open Air Theatre, play areas and a boating lake.

You might have spotted our distinctive claret and cream removals vans around the Primrose Hill area, undertaking private and business assignments. We have built up a good relationship with Camden Council, which helps us organise any relevant permits or road access requirements on your behalf.

Find out more about our removals services in and around Primrose Hill by giving us a call today. 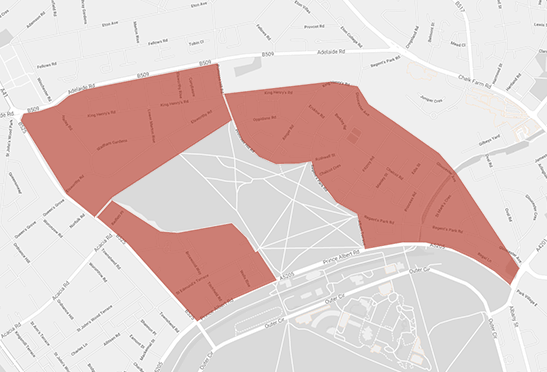