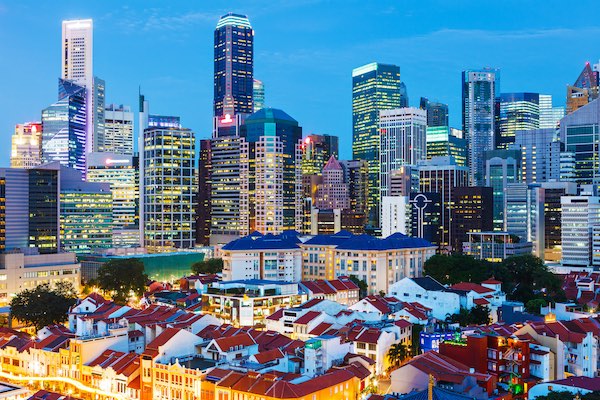 There are numerous incentives to relocate abroad for work purposes, but often the driving factors are financial gain and career progression.
When looking for opportunities that offer the best earning potential, there are a number of factors to take into consideration. Of course, the actual cash salary value is important, but some countries offer expat packages that include additional benefits like childcare and education costs, healthcare and housing.
This increases the value of the overall salary package. Cost of living and taxation are also factors; a good salary can be quickly depleted by higher than average costs of living and taxes.
A lot also depends on the industry too, with some jobs paying well above others in certain countries and less so in others, depending on what positions are most needed in different regions.
Here, we have put together a guide to 10 countries that have good earning potential for British expatriates. We’ve looked at a number of data sources and tried to find a balance between actual cash salary, potential value of additional benefits, cost of living and taxes.

Regularly topping expat salary lists, Switzerland has bags of earning potential. According to The Global Expat Index, it has the highest average income of all the OECD countries. This is backed up by the HSBC Expat Explorer Survey, where it ranks first for income. It does have a high cost of living – one of the highest in Europe – but with relatively low taxes, it still means that expatriates are better off financially than in many other popular destinations in Europe.

For those in the right industries, the United States offers the potential for very high earnings and decent benefits packages. The HSBC Expat Explorer Survey lists the USA sixth for expat income. The cost of living can be high in its major cities, but less than some European capitals, including London, making for a higher disposable income. Taxes vary state by state, but these are usually more than offset by the high salaries on offer.

New Zealand is considered one of the best places to live as an expatriate according to The Global Expat Index, which takes into account much more than just your potential income. It also comes just inside the top 20 on income alone in the HSBC Expat Explorer Survey, which is based on the actual incomes of all those surveyed by the top bank.
When all criteria are taken into account, it comes in as the fifth best place for expatriates in the world. It’s also worth bearing in mind that most major New Zealand cities have a lower cost of living than London; in the Mercer Cost of Living Survey 2019, London ranks as the 23rd most-expensive city, whereas Auckland is 89th. Add to that the fact the New Zealand government is expecting to fill many of its 47,000 job opportunities in highly skilled occupations with people from overseas, which will help to boost expat salaries and benefits packages to attract the right professionals.

Expatriates can benefit from a skills shortage in China, especially in areas like IT and science technology. A huge demand for professional-level and experienced workers – and subsequent updates to the visa policy to make relocating more straightforward – has meant that the value of packages and salaries on offer has increased. For young professionals (under 35), it is in the top 10 countries for average expat salaries and it comes in seventh for income in the HSBC Expat Explorer Survey too.

Australia remains one of the most popular places for British expatriates to relocate to, but does it pay? According to the The Global Expat Index it comes in ninth out of the 34 OECD countries when sorted by average income, and it’s down in 32nd on the HSBC Expat Explorer Survey when looked at on income potential alone.
However, this doesn’t tell the whole story. The ECA MyExpatriate Market Pay Survey says that as a country it has the second-largest expat package in Asia-Pacific – this data includes salary, benefits and tax from the perspective of how much it costs a business to employ an expatriate worker. However, with the exceptional quality of life, work/life balance and sunshine-filled lifestyle, riches come in many forms Down Under.

The UAE is well-known for its taxation system – or more accurately, its lack of. There is no income tax payable which, coupled with high salaries, means that expatriates usually enjoy higher disposable income, even taking into account the high cost of living. However, it is becoming increasingly difficult to get large benefits package alongside the salary. The HSBC Expat Explorer Survey shows that it is third for income overall, but ECA MyExpatriate Market Pay Survey, which takes into account overall packages for expats ranks it much lower.

Singapore is widely considered to be one of the best places to be an expatriate, with a good work/life balance, high quality of living, excellent options for education and accommodation, exceptional healthcare and a large expatriate community. So the fact that it also offers high earning potential is a bonus. It comes in ninth overall for income in the HSBC Expat Explorer Survey (whereas it’s 2nd overall when all criteria are taken into consideration).

For young professionals, there is a lot of incentive, financially at least, to move to Indonesia for work. It offers the top average expat salary for those under the age of 35, however income gains for more experienced workers and those in a higher age bracket are still generous. Expatriates are usually paid international salaries and can get a wide range of benefits, that normally includes housing, schooling, a car and sometimes even utilities or a driver. The cost of living is low, but it is also worth noting that the country has dropped from 13th or 31st overall in the HSBC Expat Explorer Survey from 2018 to 2019.

There are so many great reasons to opt for Canada – there is no language barrier, it’s great for families, the work/life balance is excellent and it’s culturally very welcoming to expatriates. When it comes to salaries, it only ranks 17th in the HSBC Expat Explorer Survey when only looking at income alone, but it ranks 9th for disposable income and is third overall when all criteria are taken into consideration. Canada is in need of skilled professionals in some industries and high salaries await the right candidates.

As the destination with the second highest overall expat income, Saudi Arabia certainly offers a good take-home pay, in no small part thanks to its tax-free status. The best industries to earn a good wage include engineering, telecoms, banking, consulting and IT. On top of this, most expatriates will be offered a good benefits package, that can include housing, travel, healthcare, education and air fares.
If you’re relocating as a British expatriate, contact us today to find out more about our international removals and storage services.