Mayfair – Find the best restaurants and the top things to do 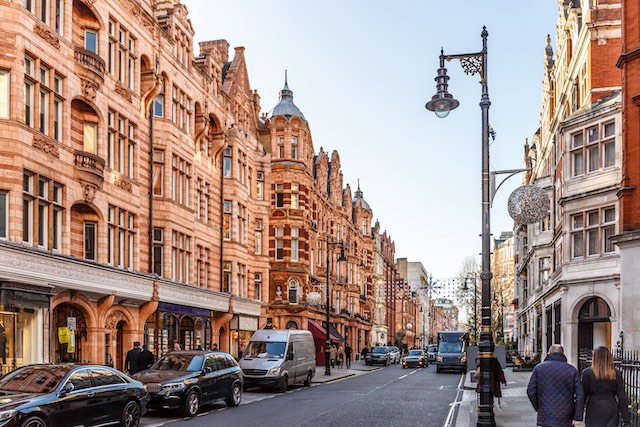 Mayfair, the most expensive destination on the Monopoly game board, is an affluent London suburb situated in the city of Westminster, towards the eastern edge of Hyde Park. Mayfair is world famous for its multitude of desirable and expensive properties, some of the priciest in London and, indeed, the world. The area is also well-known as a high-end shopping destination and for a wealth of exclusive eateries.
Far from being a destination only for the super-rich, Mayfair also offers a range of historic and cultural experiences, along with being able to boast some of London’s most beautiful green spaces.
Here’s our list of Mayfair’s top attractions to include in your itinerary when paying a visit to this exclusive area.

Mayfair is an upmarket shopper’s paradise, with world famous department stores Selfridges, Liberty London and Fortnum and Mason all situated in the area. Known as ‘Harvey Nics for the Hip’ the eclectic Dover Street Market, also situated in Mayfair, is well worth a visit. This department store with a difference is part art installation, part retail space – a mecca for the cutting edge and style conscious.
Mayfair is also home to a multitude of designer boutiques, from Burberry to Rigby and Peller via Vivienne Westwood. There’s also a wide range of luxury homeware and antique stores along with top-end toy shops and jewellers.
In general, you’ll find a range of mouth-watering, high end goods for sale in Mayfair, with the emphasis on exclusivity, rather than affordability. Treat yourself to something fabulous or indulge in a spot of window shopping combined with some serious people watching.

Mayfair has no shortage of top-end eateries to match its range of high-end shopping venues, so if haute cuisine is your thing, you’ll certainly be spoiled for choice.
We recommend a visit to Hide, headed by Michelin started chef Ollie Dabbous. Opened in 2018, this elegant eatery set tongues wagging with its extraordinary tasting menu – a nine step journey to foodie heaven.
Cut at 45 Park Lane has recently been touted as the finest steak restaurant in London by Tatler and while Wolfgang Puck’s first European restaurant offers a range of other delicious offerings, the steak is definitely the star here – whether you choose a South Devon Angus, a Wagyu / Black Angus cross from Idaho or an Australian fillet.
Few London experiences are more magical than dining at The Ritz, with its spellbinding dining room and fine seasonal British produce including Scottish lobster, Norfolk crab and beef wellington. You’ll be well-fed and well entertained, as a pianist is in permanent residence. This romantic destination is perfect for anniversaries, first dates and even proposals. Think lavish, luxe and truly lovely.

No visit to Mayfair would be complete without taking at trip down Savile Row. Known for its traditional bespoke tailoring for men since the 1800s, this central Mayfair street has enjoyed a rich and varied history, from hosting the HQ of the Royal Geographical Society to being the location of the Beatles final live performance on the roof of the Apple office at number 3.
The architecture and cultural history of the street make it well worth a visit, even if you’re not in the market for a traditionally tailored men’s suit.

An American in London

Grosvenor Square is a large garden square set in the heart of Mayfair which has traditionally been linked to the USA. In 2013, a memorial garden to the British victims of 9/11 was erected which features a poem by Henry Van Dyke inscribed on a memorial stone underneath which is buried a piece of steel twin towers wreckage.
John Adams established the first American mission to the Court of St James’s in 1785 in Grosvenor Square and, in fact, lived there himself from 1785 to 1788, in a house that still stands on the corner of Brook and Duke Streets.
Once home to Oscar Wilde, the square is a beautiful green public space surrounded by some very exclusive residences, including many former and current embassies.
Join office workers lunching in the square on sunny days or take some time for quiet reflection in this peaceful and immaculately maintained space.

Set at the heart of Mayfair’s Piccadilly is the beautiful Royal Academy of Arts, an exhibition space and learning institution that’s been privately funded and run by artists for over 250 years. The site is known for its annual summer open exhibition which showcases pioneering work from contemporary artists. The Royal Academy also plays host to an impressive permanent collection that includes work by artists including Tracey Emin, Dame Laura Knight and Angelica Kauffman.
If you’re interested in spending some time at the cutting edge of Britain’s art world, a visit to the RA is a must during your time in Mayfair.

Immortalised by the 1950’s popular song ‘A Nightingale Sang in Berkeley Square’ this pretty town square has a rich and varied history.
Designed and built by architect William Kent in 1789, Berkeley Square plays host to Grade-II listed building Lansdown House at number 57, originally created for the Earl of Bute in 1763, which has been home to three British Prime Ministers. It’s also the site for Britain’s most haunted house, number 50, well worth a visit for fans of the supernatural!
Berkeley Square is an idyllic spot to relax on pampered green lawns under sweeping trees around a stunning pre-Raphaelite fountain.

Music lovers will enjoy paying a visit to the respective residencies of both 18th century compose George Frideric Handel and legendary rock guitarist Jimi Hendrix, which have been transformed into a museum that celebrates the life and work of both iconic musicians.
Handel lived at 25 Brook Street from over 35 years from 1723 while Hendrix occupied the flat next door over 250 years later, in 1968.
Separated by a wall and 200 years, Handel Hendrix combines the homes of two musicians who chose London and changed music. Wander round the famous composer’s rehearsal room where he came up with some of his most famous works and take in the eclectically furnished flat where a rock icon jammed with artists like the Rolling Stones.
Mayfair is an exclusive part of the nation’s capital which has something to offer everyone, from fine-dining to history and culture. Whether you’re in the market to shop until you drop or you prefer a more leisurely day spent in some of the area’s picturesque parks and gardens, you’ll find plenty to do in this world-famous spot, nestled in the heart of London.
If you are moving to or from Mayfair, please get in touch to start working on your bespoke moving plan today.