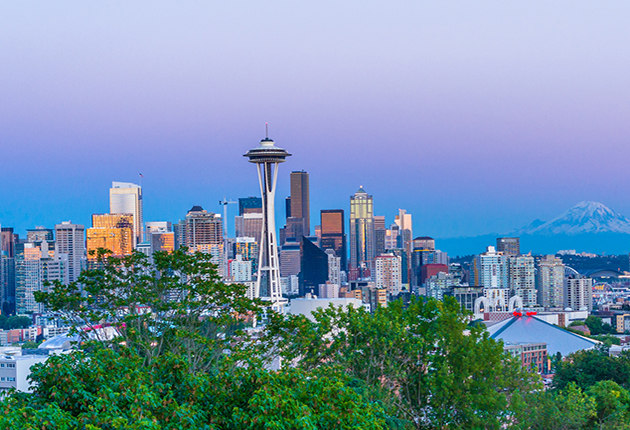 The seaport city of Seattle, located in the north-west of the United States, is a place that goes from strength to strength in terms of its economy.
Due to its strategic location on the coast, the city’s business historically revolved around the sea as a major port, trading in particular with Asia, with many jobs based around this industry. It also has a strong association with the aerospace industry, as Seattle is home to the original headquarters of Boeing.
Over the years, the economy has thrived and diversified into other areas, weathering the storm of the global recession and rebuilding ever since, though the effects are still there with staffing cutbacks in some large businesses. It has become a technology hub, with famous brands such as Microsoft, Facebook, Google and Amazon having bases in the city, employing workers from around the world.
Seattle is also known for its many start-ups and entrepreneurial endeavours, with innovation and development high on the agenda. This makes it popular with expats looking for a new way of life, as well as a career-boosting work move.

Most expats working in Seattle are hired within the technology, engineering, web development, software or healthcare sectors. There is a lot of international inter-company transferring, as it is important to have a job in place to be able to get a visa to work and live in the United States.
The big corporations, like the aforementioned Google and Microsoft, also have opportunities for workers from all over the world, particularity software engineers, computer analysts and web developers.
The good news is that Seattle has a good, healthy working environment and a low unemployment rate. It is known for productivity, and there is a strong focus on investing in people in terms of training. This can mean a low staff turnover, which limits the numbers of vacancies available, however it also offers job security long-term, which is good news for expats making a long-distance relocation.
For those who are moving to Seattle without a job already in place, for example partners and other family members, there are other areas where employment can be found, such as in the health sector, physical and occupational therapy, and the entertainment and hospitality industries.

Looking to the future

The job market is currently strong in Seattle. The Seattle Times, in its Job Outlook 2017, says that there was a 2.9% growth in the number of jobs in 2016 and this was a trend that is expected to continue into this year.
The report unveils data that suggests it is computer and mathematical occupations that will help to bolster the job market across a range of sectors, as well as the big technology companies continuing to hire. The article describes finding skilled IT professionals as “challenging”, which can be good news for experienced expatriates in these areas.

For those considering a move to Seattle, it might be wise to strike while the iron is hot. The job market is strong, there are plenty of opportunities and it looks to remain this way for the foreseeable future.

If you’re moving to the USA, find out how our international removals team can help to arrange packing, storage and transportation on your behalf.