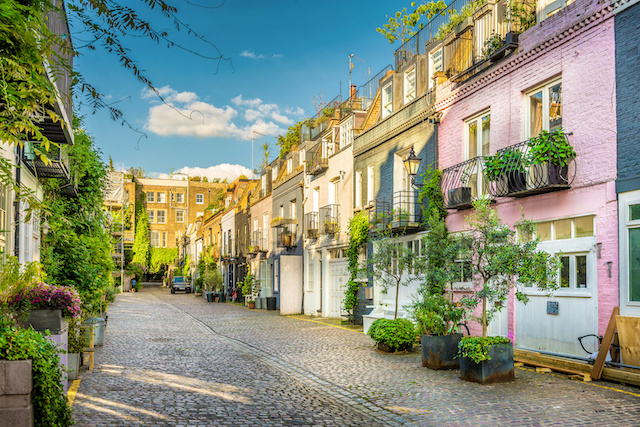 Notting Hill is usually placed in most people’s minds through one of two cultural references. The first is the iconic Notting Hill Carnival, when the streets come alive with music, colour and dance.
The other is the 1999 film Notting Hill, starring Hugh Grant and Julia Roberts. To this day, tourists come to the area to wander down Portobello Road, just like William Thacker (Grant) in the film, and look for the famous house and its iconic front door (which was removed and sold at auction in an attempt by the new owner to stop film fans knocking on their door).
However, while these two attractions might bring a wealth of tourists into Notting Hill, for residents and those considering moving to Notting Hill, there is a much wider appeal. Not least is the close-knit community feel throughout this diverse and cosmopolitan neighbourhood. It has a real village vibe, a pocket of small-town in the big city.
It offers grand homes, private gardens, excellent schools and local amenities. It’s no wonder that the residents of Notting Hill never want to leave, with many downsizing from the large family homes to stay in the same area rather than moving to other neighbouring communities over time.

When it comes to finding a property in Notting Hill, it’s the striking Grade II listed buildings with access to the famed communal gardens that sit at the heart of the community. In a city where outside space is limited, these lush green parks mean that residents pay a premium to live here, even by London standards.
The whole area was designed by architect Thomas Allanson, with concentric circles of terraced streets rippling out from the vein of the neighbourhood that is Ladbroke Grove. When he envisioned the area, Allanson planned for a central circus, surrounded by houses. The circus never came to be, but the street layout is exceptional.
Families, both international and national alike, entrepreneurs and wealthy investors flock to Notting Hill. The white stucco terraces looking in on those garden squares make perfect family homes; while the many converted properties offer a choice of luxury period flats.
The location is another attraction in itself. Just a few miles west of central London, Notting Hill is well served by public transportation. There are numerous Tube stations within an easy walk, for access to the Central, Hammersmith & City, and Circle lines. It’s also well located to get out of London; the M4 and M40 are within easy reach, and access to Heathrow is good.
For families moving to Notting Hill, it’s reassuring to know that some of the top independent schools are in the area too. There are numerous pre-preparatory, primary and prep schools, with the most notable being Wetherby and Pembridge Hall, both situated in Pembridge Square. Thanks to the multinational population of the area, there are also a number of prestigious bilingual schools.

Notting Hill is, through its natural layout, very green. The stunning gardens are right at its core, perfect for those who live in the area with access to these private spaces. However, it’s also not far to get to other London parks, with Kensington Gardens, Hyde Park and Holland Park all within easy reach.
It’s impossible to ignore the biggest event that happens in Notting Hill each year. On the warm August Bank Holiday, the streets come alive in a celebration of the British West Indian community. Since it began in 1966, the Notting Hill Carnival has grown and now attracts about 2.5 million people a year, making it one of the largest street festivals in the world. While it is an exciting event to be part of, many long-term residents vacate the area during the busy summer months to avoid the bustling streets and influx of tourism.
Notting Hill has long attracted creatives, artists and musicians. That legacy can be seen still in its fringe theatre scene. The Gate Theatre presents international plays with an invigorating and ever-changing programme. Close-by is the iconic Grade II listed The Coronet Theatre, which displays multi-disciplinary international and UK works.

Notting Hill’s gastronomic scene is much like its residents: cosmopolitan, upmarket and diverse. From high-end Michelin-starred restaurants to street food, anything you desire can be found here.
It’s impossible to mention eating in Notting Hill without a nod to The Ledbury. This two-Michelin star restaurant offers an exquisite menu of fine-dining classics. It’s often given the accolade of one of the best restaurants in London.
For those following a plant-based lifestyle, Notting Hill caters beautifully. The flagship Farmacy is situated here, where it opened its doors in 2016. This restaurant offers food that is completely free from dairy, refined sugars, additives and chemicals. All of the ingredients are grown on its own farm or sourced from trusted local and sustainable suppliers. There are numerous other organic, vegan and vegetarian restaurants in the area too for the health-conscious residents.
All along Portobello Road are places to eat, including the casual but delicious Electric Diner. In Ledbury Road is Ottolenghi, which has many outlets throughout London, the original being the Notting Hill branch. This deli sells the most mouth-watering pastries and delicacies to take away. There is also a small table at the back for just 10 people, but it can’t be booked so it’s a case of pop by and see if it’s free.

Shopping in Notting Hill is a great experience. The main Portobello Road, and the streets that come off of it, are packed with quirky boutiques, antique shops and local delicatessens.
Portobello Road Market is the world’s largest antiques market, with over 1,000 stalls. It’s certainly worth a visit to find interior gems that are distinctly unique. The main market day is a Saturday, however you can visit on other days too when you can shop for more than just antiques. You can find clothing, food and local fruit and vegetables on most days, though it’s closed on Sundays.
For high-end designer wares, head instead to Westboune Grove, with branches of some of the biggest names in modern fashion, including Anya Hindmarch, Matches Fashion and The Kooples. Alongside clothes are up-market furniture stores and art galleries.
It’s clear that Notting Hill has a vast appeal. If you’re considering moving to the London residential area, Cadogan Tate can help you with your London removals. Contact us today to find out more about how we can help you move to Notting Hill.