The complete guide to French cheeses 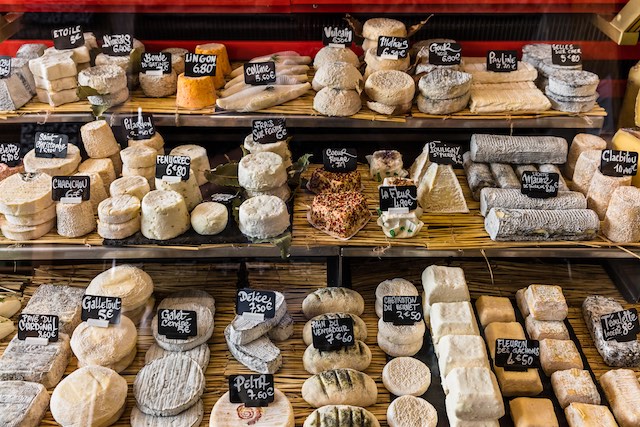 Asked to name our favourite French cheeses, most of us are familiar with only a handful of popular choices that might include Brie, Camembert and Comte.
In fact, France boasts over a thousand varieties of delicious cheese to accompany the fine wines the country is also famous for. The French love their fromage so much that they consume average of 24.4kg of cheese each per annum, making France one of the biggest cheese gobbling nations on the planet.
Whether soft or hard, crumbly or firm, mouldy, blue-veined or downright stinky, there’s a French cheese to suit everyone. While they’re too many and varied to list, France’s fromage choices can be categorised as four main varieties; soft, blue, pressed and goat’s milk.
When you move to France, one of the advantages to look forward to is the wonderful selection of cheese on offer.
Here’s a complete guide to French cheeses, along with three varieties to delight your taste-buds (don’t forget to enjoy them in traditional French style, accompanied by a large glass of wine!)

French soft cheeses are traditionally made by combining raw cow’s milk with lactic acid bacteria in a process called curdling. The curd is then placed drained in moulds before being salted and dusted with penicillium to create an external white mould called ‘the flower.’
This hard rind protects the soft interior of the cheese, stops it from melting and adds both texture and flavour when consumed. Soft cheeses are typically cured for up to two weeks before being dried and wrapped. They are then stored for a further 4 to 5 weeks, allowing them to become creamier and more odorous. Left too long, however, soft cheeses start to give off a distinctive ammonia smell and should be discarded.

Named after the French region from which it originated (roughly corresponding to the modern department of Seine-et-Marne) Brie is pale cream with a slight greyish tinge in colour, enveloped with a thick rind of edible white mould.
Although traditionally a French-made cheese, Brie is now produced by a variety of countries across the globe, allowing for national and regional varieties to be developed (Wensleydale and Somerset Brie are available in the UK, for instance.) Brie is also now sold in a range of flavours, from herbed to blue and is often eaten with fruit to counteract its strong, woody taste.

This quintessentially French soft cheese has an earthy flavour that’s slightly stronger than its close counterpart, Brie. Camembert has a pungent aroma and distinctive taste that’s either loved or hated. It was first made in the late 18th century at Camembert, Normandy in Northern France and, also like Brie, is covered by a thick layer of edible mould.
Camembert works well with fruity and tangy flavours and is often oven baked until melted in the centre before being served with bread and crudités for dipping into a gooey molten interior.

Epoisses de Bouirgogne is a soft, sticky cow’s milk cheese produced by Jacques Hennart in the small village of Epoisses. It has a distinctive bright orange colour and pungent smell combined with a surprisingly sweet, slightly spicy flavour. What makes this cheese truly unique, however, is the practice of repeatedly washing the rind in Marc De Bourgogne, a brandy made from the pomace of grapes after winemaking.

This distinctive French cheese variety can be easily recognised by the streaks of blue-green mould that run through it like veins. Though it’s thought that blue cheese was accidentally created when a piece of mouldy bread was placed next to a soft cheese, modern varieties are now mass produced by heating milk at 32C before allowing it to coagulate with lactic ferments and rennet.
The curd is then sliced, drained, crumbled, moulded and salted, before being pricked with needles allowing oxygen to penetrate the cheese, creating the famous blue mould. The cheeses are then wrapped in thin foil and before being placed in cool, damp cellars to mature slowly.
French blue cheeses pack some powerful flavours and strong smells that have divided cheese lovers throughout the ages.

From the Auvergne region of central France, an area renowned for its century’s old tradition of cheesemaking, this popular creamy blue cheese is made from the milk of cows grazed on the lush grass of volcanic pastures. St Agur achieves a delicate balance between delightfully creamy texture and intense flavour.

Roquefort is a sheep’s milk cheese produced in the South of France that has become one of the world’s most recognisable blue cheeses in recent decades. Referred to by the French as ‘the cheese of kings and popes,’ Roquefort has a salty, tangy, sharp flavour that’s splits the audience every time.

Made for over 150 years in the Auvergne region, this French blue cheese has a firm texture and a strong smell and taste. Not for the feint hearted, Bleu d’Auvergne is thickly marbled with blue vein and has a pungent, salty, spicy, peppery taste that’s balanced by a creamy, buttery texture.

French goats’ cheeses come in a range of shapes and delectable tastes, all made from goat rather than cow or sheep’s milk. These strong-flavoured cheeses are usually made by small, farm-based factories where draining often occurs naturally and the cheeses are left unwashed for an authentic taste.

Banon a la feuille is an unpasteurised, uncooked and unpressed goat’s cheese that’s traditionally wrapped in chestnut leaves and tied with raffia. Made in the dry hills of Provence, the young Banon cheeses are placed in earthenware jars, seasoned with salt and pepper and doused in vinegar before being left in a cool cellar to ferment. The contents of the jar will last for many years to come, with their flavour becoming increasingly fierce as they age.

Boucheron is a goat’s milk cheese native to the Loire Valley. Semi-aged, ripening only for 5 to 10 weeks, Boucheron is produced in short logs that are sliced and sold as small rounds. The cheese is firm in texture, becoming softer as it ages along with developing a sharper, more intense taste. Bourcheron is often used in salads or combined with fruits to counter its strong, goaty flavour.

Sainte-Maure de Touraine is a classic goat’s cheese, also produced in the Loire Valley. The fresh cheese is ashed and ripened to produce a log that’s both creamy and full-flavoured. It’s so delicate when young that it must held together by thing straws until it matures and hardens slightly.

Pressed (hard) cheeses share many similarities with familiar British cheeses like cheddar and wensleydale and are typically made from cow’s milk. Two varieties are typically produced; cooked (in which the whey is heated during the production process) and uncooked (where it remains raw.) French pressed cheeses are likely to be produced in large rounds that must be cut into slices before being sold.

Comte is an unpasteurised hard cheese that’s produced in the Jura mountain region and has a unique, nutty, mellow flavour. A hugely versatile cheese that’s used for snacking and cooking along with being at home on a tasting board, Comte is popular the world over, with the highest production rate of all French cheeses (around 64,000 tonnes is made in France each year.)

Mimolette is traditionally produced in the city of Lille, though it originated from Holland and has many similarities with Edam. Produced in rounds, Mimolette has a crater like surface and distinctive bright orange interior, resembling a melon when cut open!
Maturing this cheese involves storing it in a dark, damp cellar, turning each cheese every week for a minimum of six months. The result is a firm texture and strong, nutty flavour with a thick brown crust.
Mimolette is a firm favourite on cheese boards across France and can also be used in cooking as its hard texture makes it easy to grate.

Cantal is a firm cheese produced in the Auvergne region of central France. Sharing some similarities with UK favourite cheddar, Cantal is one of the oldest French cheeses, dating back to the Gaul’s rule. Cantal is sold in three varieties, young (fresh, sweet and milky), aged (buttery and creamy) and well-aged (strong-tasting, peppery and spicy.) Cantal works well with nuts, grapes and apples and is often used in salads, soups, fondues or gratins.
With so many unique textures and flavours to explore, the French cheese market is ripe for discovery. When you live in France, exploring the variety of both local and national cheeses that you will find at your local market and supermarket is a great way to get more immersed in the French way of life.
Along with wines it is one area that you can start exploring and learning more about before you move. Whether you enjoy cheese as a snack, use it regularly in cooking or want to put together a truly impressive cheese board for your next dinner party, look out for our favourite French cheeses at your supermarket, ask for them by name at your local cheesemonger’s or track them down online – with over a thousand varieties, you’ll never run out of a new one to try!
Our expertise and excellence of service have won Cadogan Tate a loyal following among the world’s most affluent homeowners and demanding global businesses: people who expect the best, on time, every time, and know they can count on us to deliver this.
Telephone or email us today, and allow Cadogan Tate to handle everything, with care.