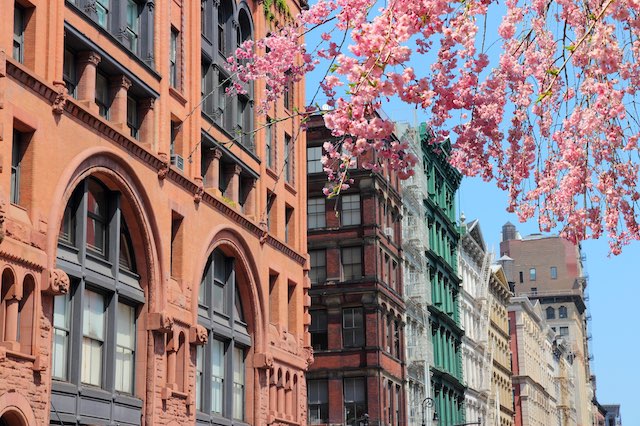 New York, a familiar backdrop to Hollywood movies, TV shows and books alike, entices countless visitors to enjoy its famed sights. From Times Square to Central Park, tourists often feel like they know what to expect from the city before they even step off the plane. And yet it is still full of surprises, away from the main attractions.
With its rich history and multi-layered culture, New York has a reputation for being a whole world in one city. It boasts over 28,000 acres of public parks, including the aforementioned Central Park, which is only the fifth largest park in the NYC area at 843 acres. It’s also home to countless museums, theatres, art galleries and sites of worldwide historical significance.
It’s clear to see the benefits of the city for tourists, but what about for those who wish to call New York City their home? In this ultimate New York city guide, we explore the sights and sounds of the city, the best places to work, things to do in New York, what it’s like to raise a family in the city, the daily lifestyle and more.
If you’re considering moving to New York from the UK, read this first to discover what to expect from expat life in the USA’s most populous city.

From bohemian chic to luxury living, New York has a district to suit all preferences. Of course, being a city of such high calibre, the cost of living is equally lofty.
Multicultural Brooklyn offers townhouses suitable for expatriate families, with rentals coming at around 20% less than those found in Manhattan. This can be a good option if floor space is a priority over proximity to the city centre.
Williamsburg offers an authentic NYC experience with a thriving cultural scene and unique entertainment, while the Upper East Side is filled with luxurious housing and leafy green spaces.
Regardless of where you opt to reside, be aware that the New York housing market is fast, hard and competitive – both for buying and renting. Work with a real-estate broker to ensure you get the best advice and begin your accommodation hunt as early as possible to avoid disappointment.
Find out more about the residential locations for expats in our article on the ‘Best places to live in New York – in-demand neighbourhoods’.

Being a global financial and commerce centre, New York offers an abundance of potential career opportunities. Some of the most well-known international businesses are headquartered in the city, between them employing hundreds of thousands of people, including both local talent and foreign nationals.
In the banking and financial services sector, JPMorgan Chase & Co has its corporate headquarters on Park Avenue and is one of the largest banks in the world. Likewise, Citigroup Inc’s headquarters are located in Manhattan. Both are considered as part of the ‘big four’ banks of the USA.
In the facilities and services industry, ABM Industries has over 100,000 employees with contracts for retail, government, industrial and commercial clients. Those with a specialist knowledge in pharmaceuticals will know of Pfizer Inc, which has its corporate headquarters in NYC. It’s one of the biggest pharmaceutical companies in the world.
It’s not just American companies in New York that British expatriates relocate to work for. PricewaterhouseCoopers (PwC) has its headquarters in London and is a British professional services network, the second largest in the world. PwC is a regular feature on Fortune’s ‘100 Best Companies to Work For’ list.
Money Inc has a list of the 20 biggest employers in New York City, which is a useful resource for expatriates exploring potential opportunities.

What to do in New York

New York is known for many things, so as an expatriate the lifestyle is busy, exciting and diverse.
For those who like to shop, New York City is a paradise of malls, outlets, boutiques and up-and-coming designer finds. From the coveted fashion brands of SoHo to the luxurious, high-end stores of Fifth Avenue, via the bohemian cool of Greenwich Village, there’s certainly something to suit all tastes.
The diversity of shopping in New York means you can source items that you wouldn’t be able to get anywhere else in the world. It’s often on the cutting-edge of worldwide trends, and many high-end fashion houses have their flagship stores in NYC. With shops open long hours – some even 24 hours – it’s one of the city residents’ favourite pastimes.
Alternatively, if world cuisine is your forte, you’ll be happy to hear that New Yorkers adhere to an ‘eating out’ culture – hardly surprising in a city that presents culinary delights from all over the world. Visit Little Italy or Chinatown for a truly authentic gastronomic experience.
There are numerous Michelin-starred restaurants in the city too. Eleven Madison Park is often considered one of the best restaurants in the world. It offers spectacular views of Madison Park through 20-foot windows. Le Bernardin is the place to go for high-end seafood, with an outstanding reputation.

The arts and sport in New York

If you’re into the arts, then this is a city that certainly won’t disappoint. Both the world-famous Metropolitan Opera and the New York Philharmonic Orchestra perform in parks across the city during the summertime, where the crowds spread a blanket and enjoy a glass of wine along with the show. Broadway, meanwhile, is renowned for its excellent comedians, musicals and plays.
When it comes to art galleries and museums, there really is no greater concentration of exceptional collections anywhere in the world. The Metropolitan Museum of Art (aka The Met) is iconic and huge – it will take multiple visits to even begin to get through the extensive collection. It’s hard to miss the distinctive shape of the Guggenheim Museum. Frank Lloyd Wright’s masterpiece of architecture has been drawing contemporary art fans from around the globe since it opened.
The Brooklyn Academy of Music (or BAM, as it is often referred to) has been at the heart of the Brooklyn music, theatre and film scene for more than 150 years, while gaining a reputation for presenting cutting-edge works of art and being visited by more than 550,000 people a year. The BAM hosts a full programme of film, theatre, dance, music, opera and visual arts.
Not only is New York known for its culture of art and cinema, but it also hosts major sporting events. The world-famous Madison Square Garden is home to basketball team the New York Knicks. The local baseball teams are the Mets and Yankees. Boasting a maximum capacity of over 50,000, the Yankee Stadium is worth a visit even on non-match days for a behind-the-scenes tour, although seeing a local team at the top of their game is an experience not to be missed and an absolute must for sports lovers. New York is also home to two American football teams, the Jets and the Giants, as well as the two local Ice Hockey teams, the Islanders and the Rangers.

New York might not, on the surface, appear to be the most family-friendly of cities. However, if you’re moving to New York with children, rest assured that it’s a great place to grow up.
There are no language barriers for children to surpass. The ambience here is brisk, vibrant and energetic. Despite that big city, rush-hour feel, expat families generally find that New Yorkers are friendly and keen to share their love for the Big Apple.

The continental climate means that there are cold winters and hot summers, though with some extremes that we’re unaccustomed to in the UK. In the colder months, it can be close to freezing and snowfall is frequent, with heavy snowstorms. In summer, it is hot, with some thunderstorms and occasional heatwaves.
It’s easy to get around the city too, thanks to the excellent public transport network. Most people use the Subway, as it’s efficient and far quicker than sitting in the city’s notorious rush-hour traffic. There are also plenty of trains and buses reaching out to the suburbs and neighbourhoods outside the main centre. Commuter links are often a key consideration when choosing where to live with family in New York.
Another consideration is proximity to the best schools. There are some excellent international schools, including The British International School in Manhattan. The United Nations International School (UNIS) also has a good reputation, as does the Nord Anglia International School of New York.
If you’re moving to the USA, find out how our international removals team can help to arrange packing, storage and transportation on your behalf.
Back to News
NEWS AND SHUTTLE SCHEDULE SIGNUP